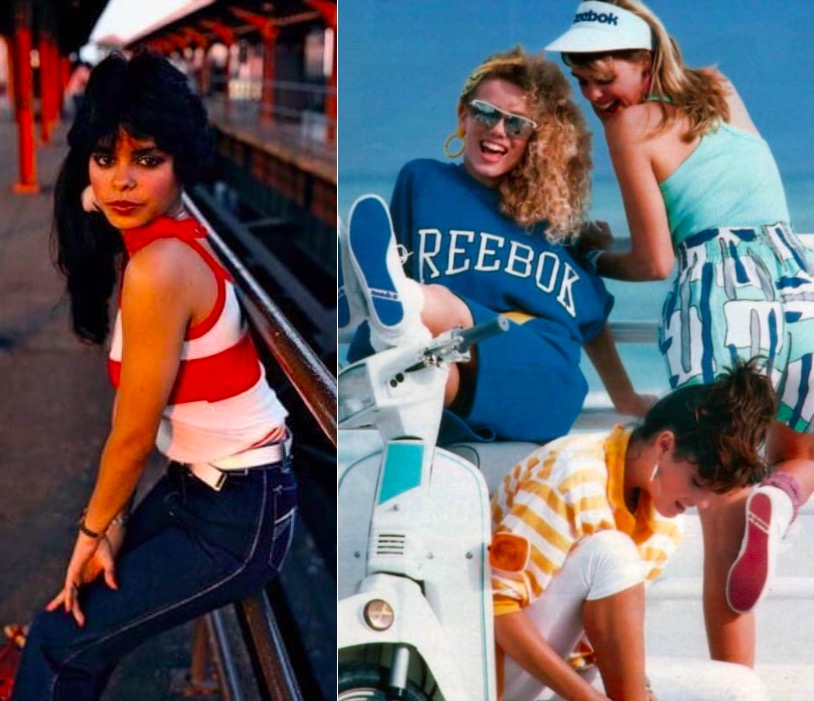 Whether you grew up in the ’80s or not, there is no denying that there is just something about the decade that people can’t seem to get enough of. Perhaps it is the neon spandex, leg warmers, boomboxes, and big hair that we love to look back on, or maybe we just long for a much simpler time.

It is certainly interesting to think about the days before everyone had smart phones – when the Game Boy and Walkman were the most popular gadgets as opposed to the iPhone and Galaxy. It was also a time when shopping malls and record stores were flooded with customers, long before we had online shopping and downloadable music.

Were things better back in the day? It is hard to say, but there is definitely something about the 1980s that keeps people reminiscing about it – so why not go back in time with these fabulous vintage photos from one of the best decades ever.

Photographer Bruce Davidson captured this stunning shot of a woman waiting for the subway in New York City circa 1980. With her voluminous hair, dark denim waist-high jeans, bold-colored tank top, and fierce look on her face – this unknown woman is a perfect representation of 1980s city fashion.

This is the exact type of ‘cool girl’ look that many young women were trying to achieve at the start of the decade. The empty, graffiti-covered station behind her only makes the photo, and the girl, appear even more stylish – making it an incredible backdrop to something that looks like it could be the cover of a rock album.

Pictured here are the reigning beauty queens of 1983. Here we have Miss U.S.A. 1983 Julie Hayek, Miss Teen USA 1983 Ruth Zakarian, and Miss Universe 1983 Lorraine Downes posing together with their pageant-ready smiles at a Maybelline press luncheon in New York City. At the time, these three lovely ladies with their fanned out hair and strikingly white teeth were considered the ‘It’ girls of the decade, gracing the cover of nearly every fashion magazine cover in the country.

Following their beauty competition success – Halek and Zakarian went on to work as actresses, and Downes went on to be a business woman. In the ’80s, televised beauty pageants were just as popular as ever, the decade also marked change for the industry, starting to represent a new time of fit, gym-sculpted bodies.

If you were one of the ‘cool kids’ of the ’80s, then chances are you had a pair of L.A. Gear sneakers. The athletic footwear and clothing company, which was founded in 1978, quickly became one of the most popular brands for shoes and clothes by 1980. Their chunky ankle-high white sneakers with bold-colored laces became a fashion staple of the era.

Even celebrities such as NBA player Kareem Abdul-Jabbar, and pop stars like Paula Abdul and Michael Jackson endorsed the brand. These girls posing here for an L.A. Gear advertisement look like the true epitome of ’80s fashion, with their spandex shorts, neon-colored cropped tees, and denim jackets – who wouldn’t want to be friends with them?

This photo from 1982 shows a family enjoying their dinner – and a bit of 3D television. Although 3D film can be traced as far back as the 1920s, it saw a worldwide resurgence in the 1980s. Back before the days of high-def television, these cardboard red and blue glasses were all the rage.

In 1982, television history was made with the first ever 3D broadcast of The Revenge of the Creature, sequel to Creature from the Black Lagoon. Local convenient stores and fast food chains often gave away these glasses as part of a promotion, buy a large pizza at Pizza Hut and get your very own 3D glasses!

It is hard, if not impossible, to talk about the ’80s without mentioning Madonna. In 1982, the singer quickly went on to reach ultimate fame after releasing her first ever singles, Everybody and Burning Up – which were both major hits throughout clubs in the US. Not before long, the Material Girl singer became known as the Queen of Pop.

Madonna’s unique, edgy, and youthful style choices consisting of everything from lace tops and denim jackets to bows in her hair and wedding gowns made her into one of the most influential fashion icons of the era. Many women and men around the world tried to mimic the young star’s effortlessly cool look.

In the 1980s, the punk rock subculture continued to rise, becoming more hardcore and provocative in its fashion choices.

Punk rockers of the ’80s – who idolized bands such as The Misfits and The Clash – would commonly dress in torn, ripped clothing sporting spikes, studs, safety pins, chains, as well as leather jackets, dark eyeliner and makeup. They also were recognized by their often elaborate, spiked up, bleached hairdos – similar to the ones this hip ’80s couple are seen with here.

Long before the days of downloadable music, YouTube, and Spotify, people actually had to go to their nearest record store in order to purchase their favorite artist’s newest album. Unfortunately, many retail music chains of our past have since gone out of business thanks to ever-increasing technology.

This woman is seen here in 1986 holding the newest Bruce Springsteen album at one of the most frequented record chains of the era, Tower Records – which sadly went out of business in 2006.

While it may be hard to recall a time when we didn’t have smartphones, let this picture be a reminder of what life was like before we all had phones that we can easily place in our pockets. This woman seen here was photographed in the mid ’80s while walking around an airport talking on her ‘mobile’ phone.

The truth is, these cell phones weren’t very mobile, and were instead chunky, a nuisance, and didn’t have the best quality. However, it was still pretty cool if you were lucky enough to have one of these guys.

The end of the ’80s brought one of the most desired toys of the decade, the first Nintendo Game Boy. The handheld game console was a mega success, with kids all over the country begging their parents to buy them one.

With many people already crazy about the Nintendo Entertainment System, which was launched in ’85, this portable device meant that kids could take Super Mario Bros. with them wherever they went. In this picture from 1989, this mom is seen here helping her children through a tough level in Super Mario on their brand new Game Boy.

In the 1980s, still many years before the days of Amazon and Ebay, the popularity of shopping malls was at an all time high. It became the number one hang out spot for America’s youth, who would often meet up with their friends at their neighborhood’s mall sporting their trendiest clothes and hopping from one chain store to the next.

These three young shoppers were caught on camera in the ’80s, each wearing a pair of huarache sandals, one of the most popular style of female shoes of the decade.

One of the biggest fads of the ’80s was without a doubt Jazzercise. With Olivia Newton John’s song Let’s Get Physical topping the charts, the exercise craze took over the country, with neon leotards, spandex shorts, and leg warmers becoming fashion necessities.

The aerobic-dance workout became all the rage thanks to fitness gurus like Jane Fonda and Richard Simmons, whose VHS workout tapes became best-sellers. Pictured here is a Jazzercise class from The Jazzercise Center in Pennington New Jersey circa 1989.

The beginning of the ’80s welcomed an exciting revolution in music technology, the Sony Walkman. The portable cassette player, equipped with its own set of headphones, became so popular, that by 1983 cassette tapes were outselling vinyl for the first time ever.

The idea that you could walk around, or roller skate, while listening to your favorite tunes privately wherever you went was a huge and new concept back in the day. Here is a picture from one of Walkman’s original ads in 1981.

One of the most famous rock bands of the ’70s and ’80s had to be AC/DC. If you were to go back in time to one of the heavy-metal rock band’s concerts, these are likely the type of people you would come across, leather vests, miniskirts, poofed-up hair, and all.

These dedicated and excited fans photographed here on October 18, 1985 are getting ready to see their favorite band perform live at the Forum arena in Inglewood, California.

Despite the popularity of the Walkman, people who preferred to listen to their music publicly, with a group of friends, still were crazy about the boombox. These heavy, bulky musical devices were huge especially in more urban communities, and quickly became a symbol of the American hip hop culture.

In the ’80s, it wasn’t an odd sighting to find a group of breakdancers showing off their moves on a New York City street corner somewhere, with their large boombox nearby blasting hip hop beats.

Another favorite clothing brand of the 1980s was the footwear and apparel company Reebok. In 1982, the company made history by coming out with the Reebok Freestyle aerobics sneaker, the first athletic shoe designed and marketed for women.

Reebok’s sales skyrocketed as their trendy and colorful fitness clothes and shoes flew off the racks in malls everywhere. These models all decked out in Reebok – high-waisted shorts, oversized tee-shirts, visor, and all – are pretty much as ’80s cool as it gets.

Gifts that you should never give according to professional organizer

Shopping for gifts can be a real stress, and yet all across the internet you’ll find so many ...

For many people, seeing the world is a big part of their bucket list, but one of the biggest things ...

If you enjoy cooking, chances are you have heard of celebrity chef Rachael Ray. But how much do you ...